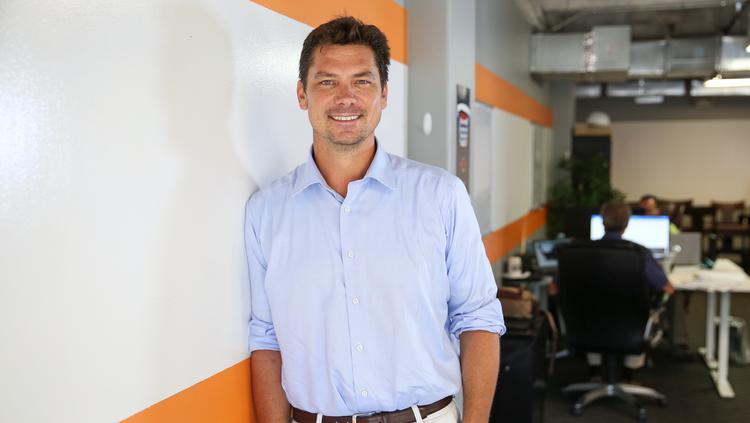 “John Eddins started what eventually became the energy-related startup Theorem Geo Associates in 2006 because he really hated his job.

“It was just me with a cat, a dog and a wife as cheerleaders,” he remembers. What began as a business intelligence company has grown into a two-dozen employee operation that develops tools for predicting outages, storm response, vegetation management and other services for the utility industry.

Duke Energy Corp. has been a customer for years, starting with mathematical modeling developed for Duke’s hydro-licensing applications with the Federal Energy Regulatory Commission. Theorem Geo designed tools for Duke to use in evaluating its now-abandoned plans for the Lee Nuclear Station.

Theorem Geo has now worked with 20 divisions inside Duke. The big score came in 2017, when Eddins’ team built CartoVid, a website for disaster response to assist Duke with analyzing potential problems and logistics for repair-crew staging during Hurricane Irma.

This year, Theorem Geo is adding Atlanta’s The Southern Co. to its client roster.

“I think it will be a high-growth year,” says Eddins, whose team works out of Packard Place. “We expect to be at 30 people by the end of the year.”

Success stories for startups can be rare enough. But Theorem Geo’s story is even rarer because Charlotte, for all its work at establishing itself as the hub for a national energy cluster in the Carolinas, has never cracked the code for encouraging energy-related startup companies.”

Site optimization allows you to have confidence in the site layout, capacity and design allowing for faster decision making and better response times.

* Use as a stand-alone service or within our Disaster Response: Logistics Suite.

Theorem Geo's DR platform allows your management team to easily roster internal employees and 3rd party vendors so all event responses can be orchestrated. Whether it's your company requesting assistance or your company supplying the support, our platform provides live, dynamic interactions and reporting. Bulk message and communicate with all responders, track all time & expenses and view location logs for your event responders.

* Use as a stand-alone product or within our Disaster Response: Logistics Suite.

We pride ourselves on providing products and services that are intuitive for the user and fit the needs of the team. All of the items in this suite will make your lives easier, and be something that is actually used in the field instead of thrown in the ditch. Through the last decade, we have been supporting large transmission utilities in advancing their day to day operations and their decision making capabilities at the higher levels. Try us out and see what we've got to offer.

During a storm response, it's easy to rely on decades-old processes. TG makes it simple and intuitive to modernize your response. From helicopter and UAV operations, to field data collection and storm tracking, we've saved our large utility partners days of response time during the last 6 major Southeastern US hurricanes.

CartoAVI (Advanced Visual Insight™), an extension of CartoVid, allows you to define, detect and locate critical points and assets. Upload your video and allow CartoAVI, our Machine Learning AI, to detect and identify objects such as poles, pole attachments, transformers, street lights, etc.. CartoAVI can find virtually anything.

* For use with CartoVid. Also part of our Transmission Mapping Solution Suite.

CartoVid is a video and photo location intelligence platform that allows for permission driven content sharing and collaboration within your company as well as with clients, partners and vendors.
* Use as a stand-alone product or within our Transmission Mapping or Aerial Patrol Mapping Suites.

The map also shows any structures that may not have been patrolled yet based off an analysis of all structures and flight tracks. The map helps pilots and observers visualize the work they have already done, but also to assist in future flight planning. This is very helpful on the NERC compliance reporting side.

* Use as a stand-alone service or within our Aerial Patrol Management Suite, Disaster Response: Operations Suite or Transmission Mapping Suite.

We have supported the past 6 hurricanes to hit the Southeast and we've always had one of our own in the command center room supporting the decision makers. We are incredibly adaptive, understand utility protocols and processes, and most of all, understand the pressures and needs of a disaster scenario. We've been there time and time again, and no disaster is the same. Having someone that knows all the mapping systems is a huge help to manage the disaster response in an efficient way.

* Use as a stand-alone service or within our Disaster Response: Operations Suite.